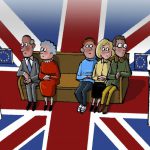 Post ‘Brexit’ Britain needs an intercultural perspective to help shape its future, to build bridges across divisions in its society, to unite communities and to celebrate diversity and the cultural differences which bring great benefits to this country.

In the climate of collective culture shock following the ‘Brexit’ vote, many people report that they suddenly do not recognize the country they are living in. In the week of political and economic turmoil since we woke to find that 52% of British people had voted to leave the EU, there has been a  a 57% increase in reported racist hate crimes.

People in the UK are questioning their own cultural identity and values such as tolerance, openness, fairness and support for the ‘underdog’ which have, until now, been taken for granted as somehow fundamentally ‘British’ seem suddenly under threat. Politicians and the media have been accused of making misleading statements, fearmongering and of using irresponsible rhetoric which has fostered ‘toxic’ xenophobia.

As interculturalists know, the culture of a country is never static and it is multi-faceted. Reassessing our values from a new perspective can be a positive and valuable exercise and perhaps we should take advantage of this opportunity to focus on the ‘best of British’ values and do whatever we can to maintain and build a global outlook, to unite people against division, and  promote inclusion and unity.

As the largest society for interculturalists in the UK,  SIETAR UK can  help.  Let us know your thoughts on how we can all work together to promote peaceful collaboration and co-operation in a vibrant, multi-cultural society where everyone feels safe and welcome.

Back to the blog overview >