Community development is not a new concept. Largely growing out of the policies and activities of British colonial governors and administrators, the theory and practice of today is still largely influenced by this legacy. As years roll on and government approaches to community development is continuously chopped and changed, its true meaning becomes diluted, as does our understanding of what it is.

It is also not a concept particularly easy to define, as many overlapping approaches to community development exist. However, the United Nations (U.N.) offers us a useful explanation, suggesting that it is:

“A process where community members come together to take collective action and generate solutions to common problems”.

Essentially, people come together to take action and bring about social change, on issues that are important to them. At its very core, community development is fundamentally based on values of respect for diversity, social justice, human rights, equality, wellbeing and opportunity.

Community development also recognises that there are people, groups and communities that are excluded and oppressed, both by individuals and by societal structures that disempower them. Community development seeks to challenge this, placing the benefits of ‘citizens’ at the centre, and so has five key principles which underpin it: 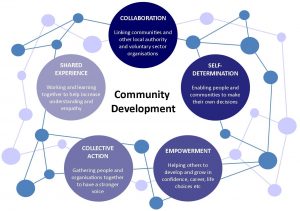 Most commonly, those involved in community development projects focus on matters of inequality or discrimination, and work is usually (but not always) focused on communities that are seen to be at a cultural, geographical or economic disadvantage.

At the very least it would be fair to say that at the moment, Britain is in a bit of a mess. At a community level hate crime (encompassing racism, Islamophobia, anti-Semitism, homophobia, sexism and so on) is continuing to rise, increasing levels of fear and anxiety within those communities most affected. 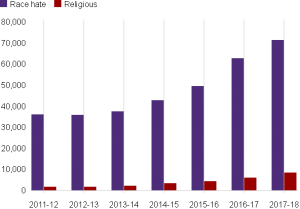 Race and Religious Hate Crimes reported to police in England and Wales (Source: Data from Home Office/Chart from BBC)

The Brexit beast has divided the nation and is continuing to demand our full attention, fuelling an increase in Nationalism and leaving many of us wishing it was still just the elephant in the room. Austerity and economic uncertainty is contributing to increasing poverty, lack of opportunity and an increase in criminal behaviour. Political disillusionment is also widespread, with low levels of trust in politicians, debate about where the line lies between free speech and hate speech, and accusations that some political parties are rife with prejudice and discrimination.

These issues combined have left many of us feeling helpless, faced with great uncertainty about where our future lies, and fear over just how high the growing level of racism and intolerance will reach.

Despite these challenges, there continues to be a strong grassroots movement across the country where charities, social enterprises, informal groups of community members and local networks are seeking to break down divisions, build new relationships, learn more about the other and overcome cultural and religious divides. There is a great need for the expertise of interculturalists at a community level in helping to bring communities together.

Economic enhancement and education is still an important facet of community development, but it is community building that we are now so desperately in need of. Far from being lost in the current state of affairs, community development is alive and kicking, and responding to the challenges of today. It is easy to be unsure whether we can make a difference, but as Margaret Mead reminds us:

“Never doubt that a small group of thoughtful, committed citizens can change the world; indeed, it’s the only thing that ever has”.

As intercultural professionals we can all contribute – both privately and professionally. Whether you are able to champion diversity and inclusion, help create strong political engagement, facilitate workshops at a community level, put social media to good use in raising awareness of societal challenges, deliver training to statutory and governmental bodies, promote inclusive education or simply call out issues when we see them, we have a society that needs fighting for.

Ciaran is an experienced intercultural trainer and consultant with a background in Higher Education. He focuses primarily on Cultural Awareness, Equality and Diversity, Inclusion, Culture Shock and Faith in the Workplace. Ciaran holds an MA in Intercultural Communication and is trained in Mediation and Conflict Resolution. He also has over a decade of experience in Community Development, supporting and leading projects aimed at breaking down barriers, enhancing understanding and strengthening rapport between people of different faiths and cultural backgrounds.

“Disclaimer: The views and opinions expressed in articles on this site are those of the authors and do not necessarily reflect the official policy or position of SIETAR UK.