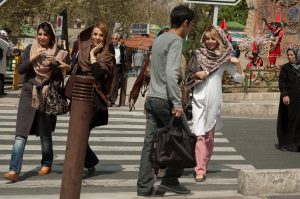 I still remember those days, with my younger brother, being sat in our kitchen listening to the huge booms being carried across the Persian Gulf by the breeze into our home in Kuwait. Sometimes the earth shook. We knew exactly what those sounds meant. Either hundreds of Iraqis being killed, hundreds of Iranians, or both.

It was the 80s and Saddam Hussein had been given the thumbs up to invade Iran and remove the ‘mad man’, Ayatollah Khomeini, who had come to power through a revolution which, rather rudely, had ruined the narrative that “God was dead”.

Next year, 2019, marks the 40th anniversary of the revolution that created the Islamic Republic of Iran; an act of independence with massive consequences that are still being played out to this day.

One of the results of the revolution and the war with Iraq was Iran’s subsequent isolation from the international community. Over the years this grew, eventually resulting in Iran becoming one of the original gangsters in the ‘Axis of Evil’.

It is only in recent years that European efforts to bring Iran back into the fold have started to pay off in the form of the Nuclear Deal. Although currently on wobbly ground, the signs look good for Iran in terms of being able to engage again with the wider world whether in commerce or culture.

My experience of growing up in an Arab country, with an Iranian mother and a British father in some ways I guess explains my path into cross-cultural training. My specialisation has always been Turkey and the Middle East – Iran was not on the cards as nobody dared, or could, do business there.

This, thanks to the Nuclear Deal, is changing. Companies are winning deals in Iran and the country is slowly welcoming in outside help to support its ambitious 2025 Vision. As a result, demand for training is there and I am loving the opportunity to now talk about Iranian culture.

One aspect I am enjoying most is dispelling myths. Through the training I am now delivering, it is clear what 40 years of stereotypes have done in terms of forming a grossly inaccurate picture of a people.

It is in this context I thought I would share some of the most common stereotypes I come across in the hope that my fellow interculturalists can help return some normality in terms of how Iran and Iranians are viewed through their own dialogue, interactions and training.

Iranians are all crazy religious

Many people think of Iranians as religious zealots. With images of women covered head to foot in black on our screens for 40 years, it is easy to understand why. Although many, if not most, Iranians practice Shia Islam in way or another, you will also come across some very liberal interpretations of the religion. If anything, the 1979 Revolution has actually done more damage to religion than good, in that people have started to reject formal religion due to its close association with the regime. For this reason, there is now a growing voice among Shia scholars for separation of state and religion.

The revolution was bloody. Its aftermath was bloody. The war with Iraq was extremely bloody. Iranians have earned themselves a reputation for ‘liking a fight’, whether a full-scale war, sending in militia into neighbouring countries or hijacking a plane. Let’s face it, Iran’s contribution to global politics has been violent at times, as with many other countries. However, this should not mean that we understand Iranians through this prism. As with many people in the world, all they want to do is go to work, earn a dollar, munch on a nice kebab for dinner and watch the match on TV with some friends.

Rather surprising to me, was coming across the sentiment many times that Iranians are backwards. An unfortunate mistake many tend to make when it comes to Iran is to associate them with Arabs. As a result, Iranians tend to be seen as ‘desert people’, living in rural conditions with cloths on their heads and herding goats. In fact, Iran is one of the birthplaces of civilization. It is full of history, culture, art, literature, invention and inspiration. Just spend some time understanding the Zoroastrian religion and you will start to see its influence on European, Asian and Islamic civilizations.

Iranians are all Iranians

As with many countries in the world, Iran is not ethnically homogenous. Although everyone who lives in Iran may see themselves as Iranian, most carry with them another form of cultural identity. Iranians who consider their DNA to come from the original people of the land call themselves Persian. The country has a large population of Azeris, a Turkish people who share more in common linguistically and culturally with Azerbaijan. To the north still live the semi-nomadic Turkmen and in the south are different Arab tribes. In the east of the country live the Baluchis whose lands also stretch into Pakistan. Understanding this diversity is crucial to understanding the very complex nature of Iranian society.

Although there are plenty more stereotypes of Iranians I could have pulled out, this gives you a flavour of some of the more common ones I come across.

It is indeed important that the international politicians do their bit to try and normalise relations with Iran. At the same time however, as interculturalists we really need to do our best to start smashing some of these stereotypes to allow all sides a fairer chance at building a new relationship without the distant sounds of bombs.

Neil Payne runs Commisceo Global, a cross cultural training provider based in the UK. After spending 6 years travelling, working and studying across the Middle East in his twenties, he completed an MA at London’s SOAS University before embarking on a career in translation, language teaching and cultural awareness training.

*Disclaimer: Any views expressed in guest articles are personal views of the authors and do not necessarily represent those of SIETAR UK.

Corporate members, such as Commisceo Global, enjoy many benefits SIETAR UK offers. One of them is an invitation to publish articles on our website, which are promoted in our newsletters and on social media. Simply submit your article to info@sietar.co.uk. We look forward to hearing from you!